At First Competition Back in the Saddle Since Recovery from Stroke, Gareth Selwood Wins 2016 IFSHA Accuhorsemat Cup 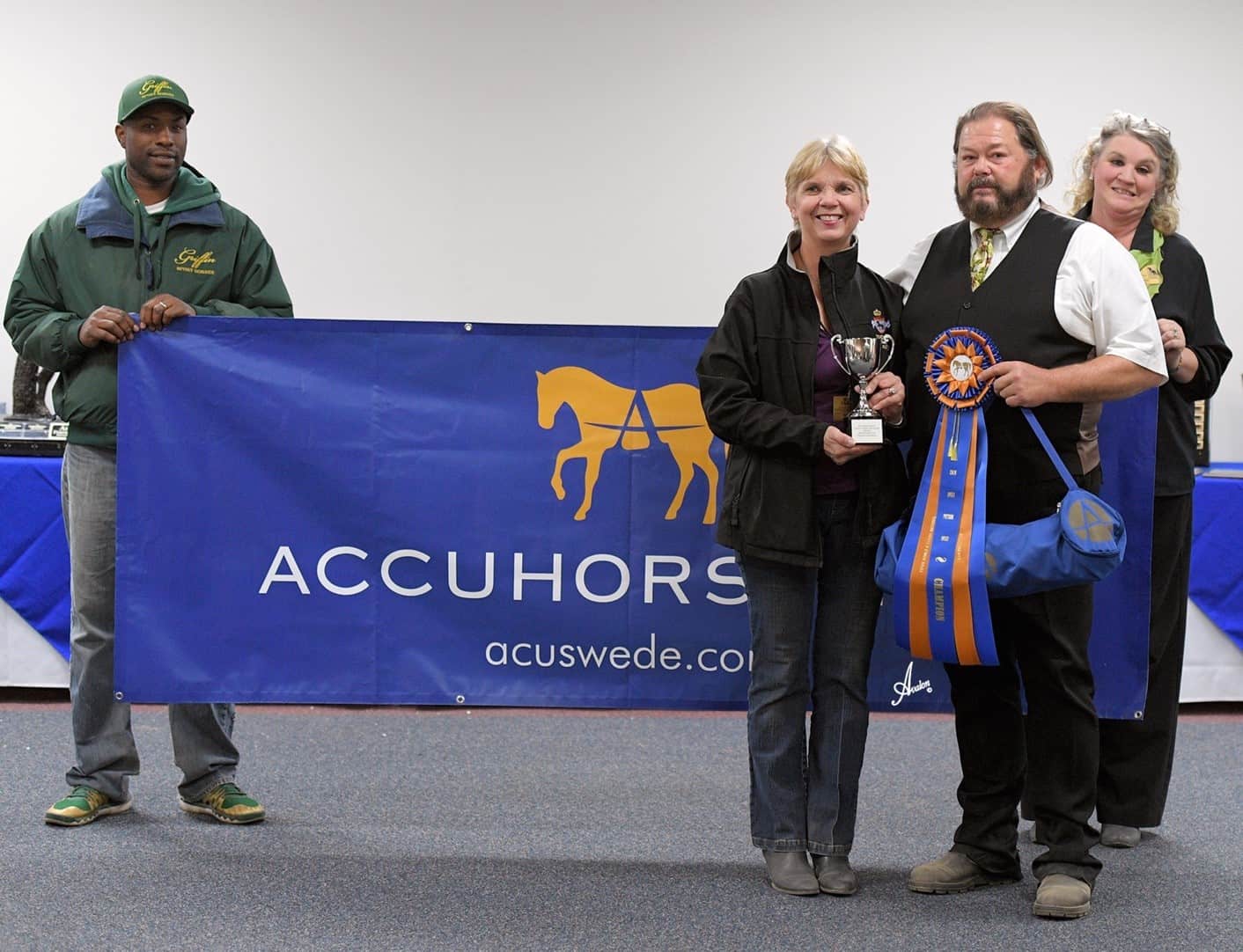 Wednesday, November 16, 2016 — Springfield, OH (November 11, 2016) – Gareth A. Selwood has been showing horses his whole life, and he recently competed at the annual International Friesian Show Horse Association (IFSHA) World Show. As a seasoned professional, Selwood is no stranger to the show ring, and no stranger to the winner’s circle. Garnering the Accuhorsemat Cup at the 2016 IFSHA World Show, held at the Champions Center Expo in Springfield, Ohio, was especially meaningful to the New York-based trainer.

Preparing for and competing in horse shows can cause stresses for trainers, riders, and their equine partners. In recognition of this, the company Acuswede travels to top shows across the United States to reward those riders who keep calm under pressure and handle the competition with ease. Acuswede is the North American distributer of the innovative equine acupressure blanket, the Accuhorsemat. The Accuhorsemat reduces tension and soreness in horses, improving mobility, performance, and overall health through regular treatments. Acuswede presented the Accuhorsemat Cup to Selwood at the IFSHA World Show in recognition of his ability to keep calm while ensuring that his horses were also calm and happy throughout the competition. Selwood credits earning the Accuhorsemat Cup to his many years of experience at staying relaxed while wearing multiple ‘hats’ at the show. He competes many horses in riding, driving, and halter classes.

It hasn’t been long since Selwood returned to the saddle after suffering from strokes over two years ago. Until just this year, he struggled to regain enough balance to ride. In the past, he had been instrumentally involved with the IFSHA World Show as a judge and show manager, and he is currently a board member and serves on the show committee. His success back in the saddle at the 2016 competition was especially meaningful to him. “Being able to ride again was a big thing for me,” Selwood said. “I have been driving and showing halter, but my balance didn’t really return until this year. Now I am back in the saddle, and the World Show was my first show riding.”

Selwood has been successfully helping his horses handle intense show ring pressure since he was very young. “At 19 years old I can remember taking 18 halter horses to a show and showing all 18 in one day. It’s something I trained myself to do,” he said. “I have been very lucky in the show ring, and when you have been lucky, you tend to be able to do more.

“Every horse we took to the World Show this year won at least one national championship, and some won as many as four. Also, this year I drove and rode a young driving horse who was extremely afraid of being there, but he still placed in his classes, earning a third and a fifth.”

As winner of the Accuhorsemat Cup, Selwood received a beautiful trophy, a ribbon, and an Acuswedemat, which is a special tension-releasing acupressure mat designed specifically for people. Using the Acuswedemat, people can get the same benefits as horses get from the Accuhorsemat.

The Accuhorsemat increases blood flow and actively assists horses in removing tension in connective tissue by stimulating key acupressure points, as has been demonstrated in a Thermography study. The Accuhorsemat can be used before riding to assist with warm-up, after riding to accelerate muscle recovery, and in between massage/chiropractor/acupuncture sessions to maintain mobility and overall health. Originally developed in Sweden, the blankets for performance horses – and now the mats for people, as well – are distributed in North America by Acuswede.

The Acuswedemat takes acupressure to a whole new level, combining classic acupressure and Swedish innovation in a portable mat that applies pressure to multiple points in the body. Using the Acuswedemat regularly increases circulation and accelerates muscle recovery and healing. It activates the body’s natural endorphins to create an overall feeling of well-being.

“I’m eager to try the Acuswedemat that I won, because when I am working all day the muscles in my back tend to cramp,” Selwood said. “I am hoping the Acuswedemat will help with that.” The Acuswedemat and Accuhorsemat can be used for relaxation, pain relief, and as part of a daily routine to improve performance activities. The products will relieve pain and tension, increase circulation, prevent soreness, and accelerate healing.

To learn more about Acuswede and the equine and human acupressure products that the company provides, visit www.acuswede.com.